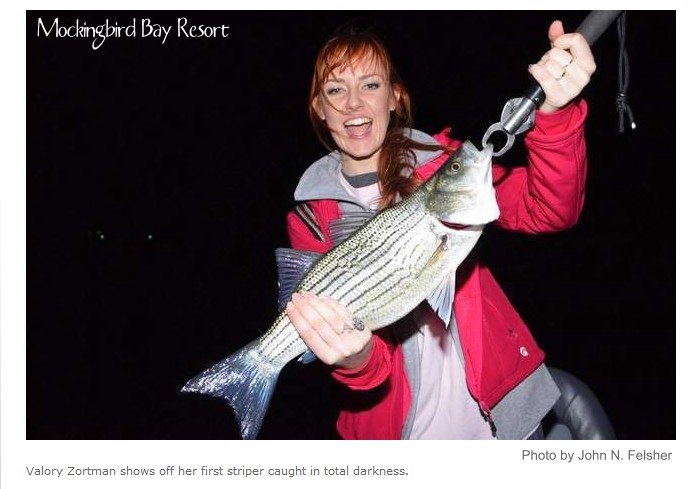 Imagine going fishing in a boat with three professional fisherman on a dark, moonless night without lights. Then imagine this was your first fishing trip.

Her parents own Mockingbird Bay Resort on Norfork Lake in Arkansas, and she was not passing up this opportunity to fish for the legendary stripers she had heard about.

The beautiful college coed was instructed on how to cast spinning tackle in a 19 ½ foot Legend bass boat with three other fishermen, or in other words, fishing in total darkness without hooking someone in the head with a big treble hook.

Zortman and company were fishing in beautiful Norfork Lake for the healthy striper population, a predator that makes savage attacks and long runs like a rocket bound for Jupiter while stripping line and taxing reel drag systems with ease.

Most people start out fishing for crappie or bluegill, but not Zortman. She was entering the fishing world in difficult conditions for a challenging fish.

The night-time ride was cool and refreshing as the smooth-running Legend boat split the waves toward a distant cove with promising structure. Each angler cast straight out towards the shore and began a medium speed retrieve with Rogue lures.

Veteran outdoor writer John Felsher soon hooked a good sized striper and quickly handed the rod to Zortman. She grabbed the rod and immediately screamed with surprise at each amazing pull of the big fish in total darkness until the battle was won.

Steve Olomon, owner of Steve’s Guide Service and veteran guide on Norfork Lake, slipped a net under the 12-pound striper that was quickly released after a couple of night pictures. She quickly picked up her rod and cast into the darkness, hoping for another fight.

Soon Zortman surprised the veteran fishermen by successfully hooking her next fish. The fine hybrid striper attacked her Rogue lure and she set the hook and screamed again in delight with each run.

The big fish made several deep dives while the novice angler reeled and tried to follow advice from everyone in the boat. The big fish fought hard before finally giving up to the new Frabill net, it’s silver sides glimmering in the light from a hat attached to Oloman’s hat.

“About 12 pounds,” Oloman said. “A beautiful fish. We have an excellent striper fishery here in Norfolk, but the bite can shut off and no one catches fish.”  But, this was not a “shut off” night and everybody in the boat caught stripers, 14 total, a good tally in almost any lake.

Different fishermen used their special approach for catching the Norfork stripers. I fished with three guides on the lake and each used a different technique for the healthy striper population.

James Nichols, another veteran striper guide on Norfork, hooked big shiner minnows a few feet under balloons, used for their better visibility over bobbers and better buoyancy while trolling.

We worked a likely shoreline, netting a 13-pound stripper and about a 4-pound smallmouth that took Jill Rohrbach’s shiner after making several vicious runs on the surface while chasing the hapless baitfish. We watched in amazement as the bass hit at least six times before thinking the bait was dead and taking it in a last swoop that provided a good fight for Rohrbach, a writer from Arkansas’s Tourism Department.

The balloon trolling system proved productive early that morning, but the bite ceased by midmorning. Tom Reynolds, longtime Norfork guide, used another version of the trolling system the next morning with planer boards that allowed shiners suspended by bobbers to run farther out from the boat while a couple of shiner rigs trailed directly behind and about 40 yards out.

Pat Kalmerton, veteran Wisconsin angler and guide, watched the rigs until his shiner passed over a brush pile and a striper flashed up to attack. Kalmerton set the hook and enjoyed a good fight before the 15-pound striper was netted and secured in Reynolds’s live well.

There should be little surprise why stripers are so abundant on this picturesque lake.  According to the Striper 247 website, the Arkansas Game and Fish Commission annually stocks about 100,000-125,000 striper fingerlings into Lake Norfork.

Stripers more than 40 pounds are commonly taken. Many in the 30-pound class are caught every year. There is an abundant population of young stripers that will keep Norfork productive for many years.  Shad and threadfin minnows are plentiful in Norfork, so stripers average 2-3 pounds of annual growth.  A 10-year-old striper could weigh up to 25 pounds. This great forage base supports huge numbers of quality fish. I believe this beautiful impoundment is one of fishing’s best kept secrets?

Lake Norfork is quite a surprise, looking more like a Canadian wilderness lake surrounded by tall conifers and very few buildings or docks. An occasional resort is the only sign of civilization on the 22,000-acre lake with 550 miles of undisturbed shoreline. There is very little submerged vegetation on this deep lake and water clarity allows visibility of more than 50-foot depths where Dan and Denise Weber offer scuba diving classes and excursions. The water is so clear that fish carcasses dropped in the lake took forever to disappear. That night a huge pet catfish likely ate the fish remains and anything else that seemed tasty.

Two weeks later, the striper bite shut down with only an occasional fish caught. Hot weather will bring on deep-water fishing on the deep, clear lake when stripers suspend below the thermocline. Fall should bring on an exciting topwater bite, if conditions are right.

For now, anglers on Norfork are waiting for the next big run and Valory Zortman is ready for “rippin’ more fish lips.”  We may have created a fishing monster.

***A huge Thank You to John Felsher, Kenny Kieser, and Steve Olomon for giving Val some awesome first-fish memories!